Mass Communication students were honored for their accomplishments during the MCM Achievement Day on October 15th.
The Achievement Day was held in order to honor students of all years for their achievements and their hard work in the year 2018-2019. The event honored students for their GPA scores, their community service and their Graduation Projects.
The fourth iteration of the annual Achievement Day was hosted by The Dean of the Faculty of Al-Alsun & Mass Communication, Dr. Laila Galal, and Mass Communication Department Head Dr. Amany Bassyouny, who each gave welcome speeches at the beginning of the day. The event was organized by Teaching Assistant Heba Rashed and presented by Teaching Assistants Menna Soliman and Hatem Selim.
Students are given the opportunity to send in any notable achievements that they have personally accomplishment via email, and a small selection of students are then chosen and honored for their work through this event.
The event started at 1:40 p.m. with Dr. Laila Galal and Dr. Amany Bassyouny giving welcome speeches to the students. Dr. Amany spoke of MIU’s humble beginnings during her speech, noting that the very first graduate class of the Mass Communication consisted of 9 students. As Dr. Amany reflected on her years in MIU, she stated that the she has learned from her students, whether it be through their work or their perspectives. She also congratulated them for their achievements.
“You have accomplished things you, yourself did not think was possible for you to accomplish,” said Bassyouny.
Following the welcome speeches, the presenters went on to honor the students with the highest GPAs from each school year, then went on to honor students who for their community services.
“It feels rewarding to feel appreciated for your work and effort even if you don’t do it for recognition,” said Nahed Anis, one of the recipients of this honor. “It is important that the university recognizes the work of their students.”
Next was honoring students for their academic work. This started with awarding student Mohammed Ashraf for his video “Mercury Rising: A Queen Tribute,” which had recently won in the Music Video category at the ninth annual MoziMotion, an iPhone Film Festival in the Netherlands. Mohammed was then awarded once again for his contribution to the film “Kararat Fasela”
The event also honored students for their graduation projects, with a group from each major getting recognized for “Best Graduation Projects”. The Head of each major was asked to give a few words before the certificates were handed out. “Al Noba” graduation project film won best graduation project from the Television Journalism major, while “Over Medication” took first place from The Integrated Marketing Communication major, and “Men Ba3d el Youm da” winning first place from Radio Television. Other certificates that were handed out included awards for stand out graduation projects, Camera Techniques and Best TA (teaching assistant).
After all the certificates were handed out, all the students were asked on stage to take a group photo with the university professors and assistants. The students were then given a small break where they were provided with food and drinks and then went back in to watch the winning film. The event then came to an end at 4:30 p.m. 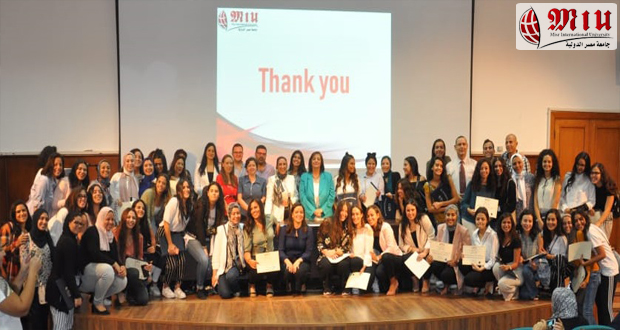 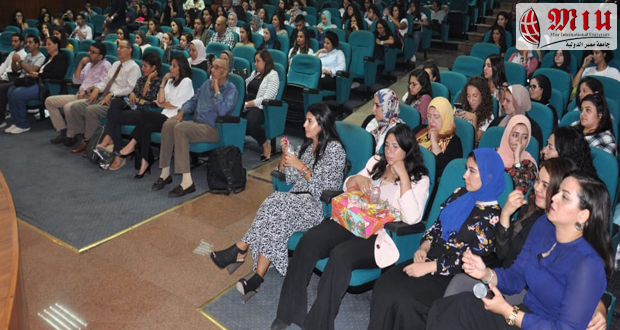 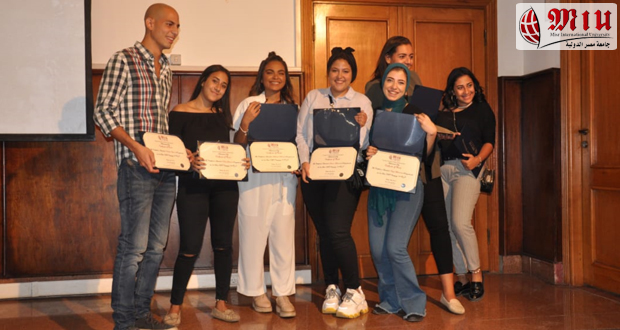